In Richard III: Hour of the Tyrant, now on Hollywood’s Theatre Row, adapter/ director David MacDowell Blue means to improve on Shakespeare’s original. He’s got a point: Richard III is not the Bard’s best play.

For one thing, it’s the last in a four-play cycle, and assumes the other plays have introduced the dozens of characters who pop in and out. They haven’t, since the four plays are almost never done together. So Richard III buries us in an avalanche of unfamiliar dukes  earls, wives, noble offspring, and plebeian thugs.

For another thing, the Bard’s play is a political hatchet job. It’s a stage version of Thomas More’s biography, which Henry VIII (the second Tudor king) ordered to “prove” it was divine justice that his rebel father killed Richard and took his throne. More paints Richard as physically and morally twisted, a cartoon villain. Shakespeare tries to improve the story, but has to stick to the main idea (his royal patron, after all, was Henry VIII’s daughter Elizabeth). 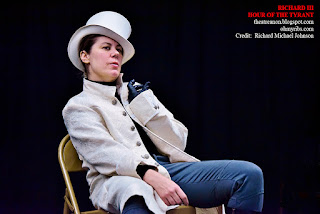 Shakespeare comes up with what he shows us again in Othello‘s Iago — a determined liar and manipulator we’d today call a sociopath. But Blue isn’t interested in clinical labels.  What intrigues him is the play’s label: The Tragedy of Richard III.

If it’s a tragedy, not a history (like the other three plays in the set), why? What is Shakespeare thinking?

Elizabethan artists all firmly held to Aristotle’s doctrine of the “tragic flaw” — a shortcoming in a person of noble nature, that causes their downfall. Being born evil like Iago isn’t a tragic flaw, it’s an unchosen, immutable condition.

Blue finds Richard’s tragic flaw not in being born deformed, but in a key line he speaks in the previous play (Henry VI Part III): “Love forswore me in my mother’s womb.” Told all his life that he is inhuman, disgusting to any woman — even his mother — Richard believes it. And in that belief, he pushes away every love and friendship life offers him.

Blue makes this the tragedy’s focus. He also sharpens the political question that can get lost in Shakespeare’s pandemonium — How did Richard ever succeed? How did all these shrewd, experienced politicians allow a dictator to take over? As in our time, it’s sadly about no one putting the people’s interests above their own.

Blue also deletes several characters, and generously adds lines and scenes from other Shakespeare plays to help us understand the characters who are left. The result is a much clearer story (with all the famous bits but one left in), and a true tragedy.

TheatreANON’s shoestring production is a bit uneven, but brings us this story fairly well. In the absence of scenery, the costumes (by Maryanne Van De Car) help keep time, place, and character clearly sorted. Richard’s costume is simple, brilliant storytelling. Likewise, the combat choreography, a graceful kabuki-like stylization by Michaela Slezak, enhances both story and ambience (no strangers bashing about in the fog here).

But the play’s greatest asset is Libby Letlow as Richard. Familiar as a comic actor and puppeteer, Letlow takes full command of this new tragic hero. Her unyielding focus and energy recall the master performances of Lisa Wolpe (founder of LA Women’s Shakespeare), and her use of stillness (reminiscent of Mireille Enos’ Emmy-winning work in The Killing) is simply riveting. Letlow can make an offstage glance as revealing as a soliloquy, and her Richard is so composed that we relax in his presence — despite what he tells us and what we see him do. Letlow’s performance is a piece of LA theatre history you don’t want to miss.

Given the blackbox stage’s limits, Blue as director opts for a presentational approach, with scenes in succession (not overlapping). This helps us keep  characters distinct — which we  need, even with fewer than half the original’s roles. More rehearsal might bring the ensemble into closer stylistic harmony, and smooth out the usual Shakespeare language issue (speed vs. clarity).

But even with its rough edges, Richard III: Hour of the Tyrant more than repays the price of admission. Blue’s thoughtful, artful revision is a serious candidate for the performing canon — and Letlow’s creation of Richard will warm your memory (and, if you’re an actor, keep teaching you) for years.
_______________
Richard III: Hour of the Tyrant, by William Shakespeare, adapted and directed by David MacDowell Blue.
Presented by TheatreANON and Oh My Ribs, at the Oh My Ribs Theatre, 6468 Santa Monica Blvd., Hollywood 90038.